Centennial Senior Secondary School is in the heart of Coquitlam, B.C. and was originally established in 1967. Centennial has approximately 1300 students in grades 11 and 12. It is structured on a semester system. The Coquitlam School Board made the decision to build a new school on the same property as the original school. The project was initially announced by the province in 2009. Detailed plans for the school replacement were presented to the public on January 17, 2012. Construction of the new school began in late 2013, and was completed for the September 2017 start of the current school year.

The project includes construction of a new Neighbourhood Learning Centre that will house youth programs and post-secondary programs. The school has a teaching kitchen, metal, automotive and carpentry workshops, and a 220-seat theatre. Design features include classrooms with moveable walls, flexible learning spaces for student-teacher collaboration, and an outdoor amphitheatre.

TEC single system warranty was applied to the project for a period of 10 years. With a 25% plus flyash content in the concrete slab, the relative humidity was still above 95% after a full year of curing. TEC Liquidam moisture mitigation was used to allow the installation of the American Biltrite Pure Rubber flooring to continue without any further delay. Levelset 200, deep pour 3, and feather edge 330 were used to level and patch various areas of the school. TEC 752 premium adhesive was used for the installation of 79,000 square feet of American Biltrite Pure Imagine sheet rubber into all of the classrooms, common areas and second level corridors. 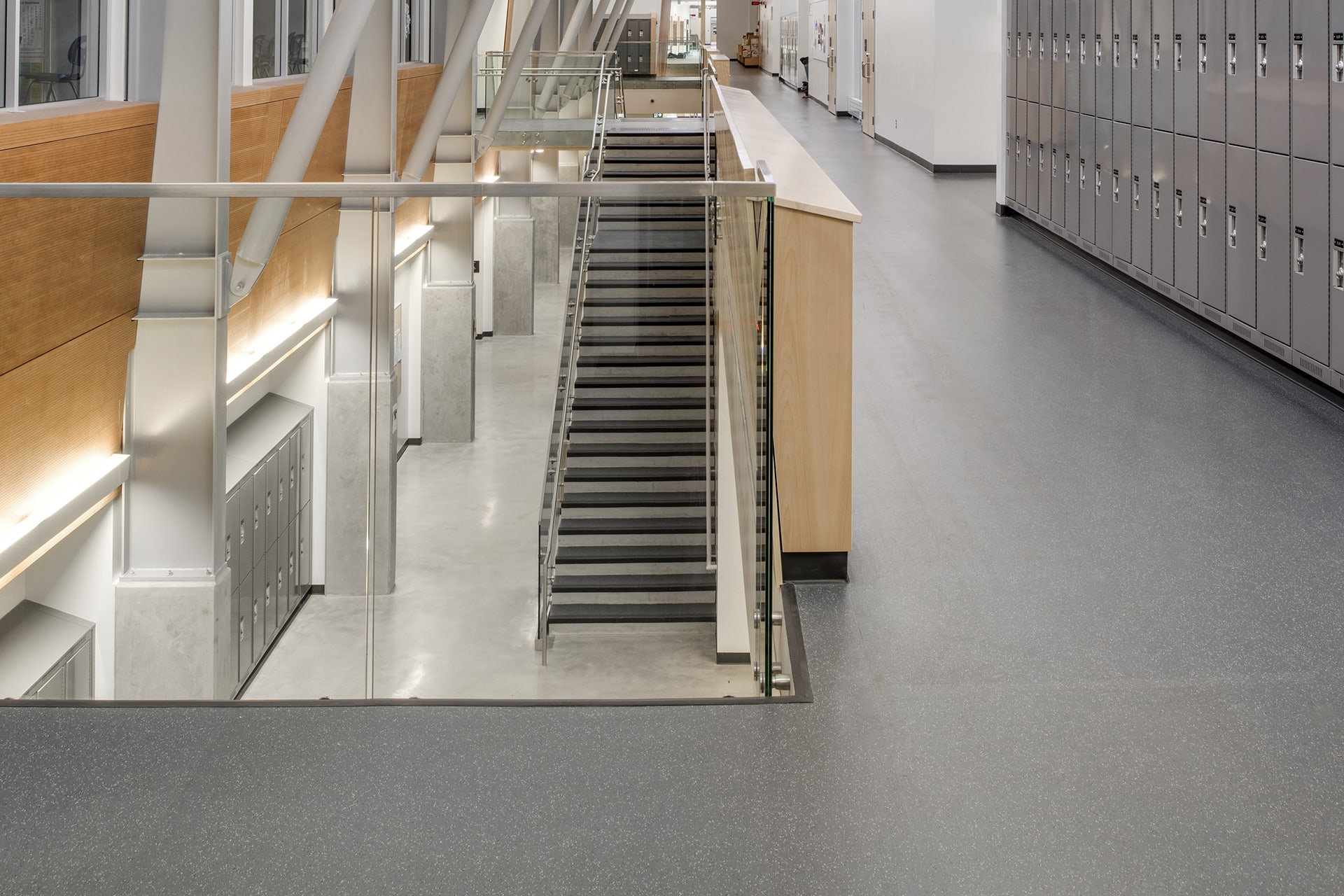 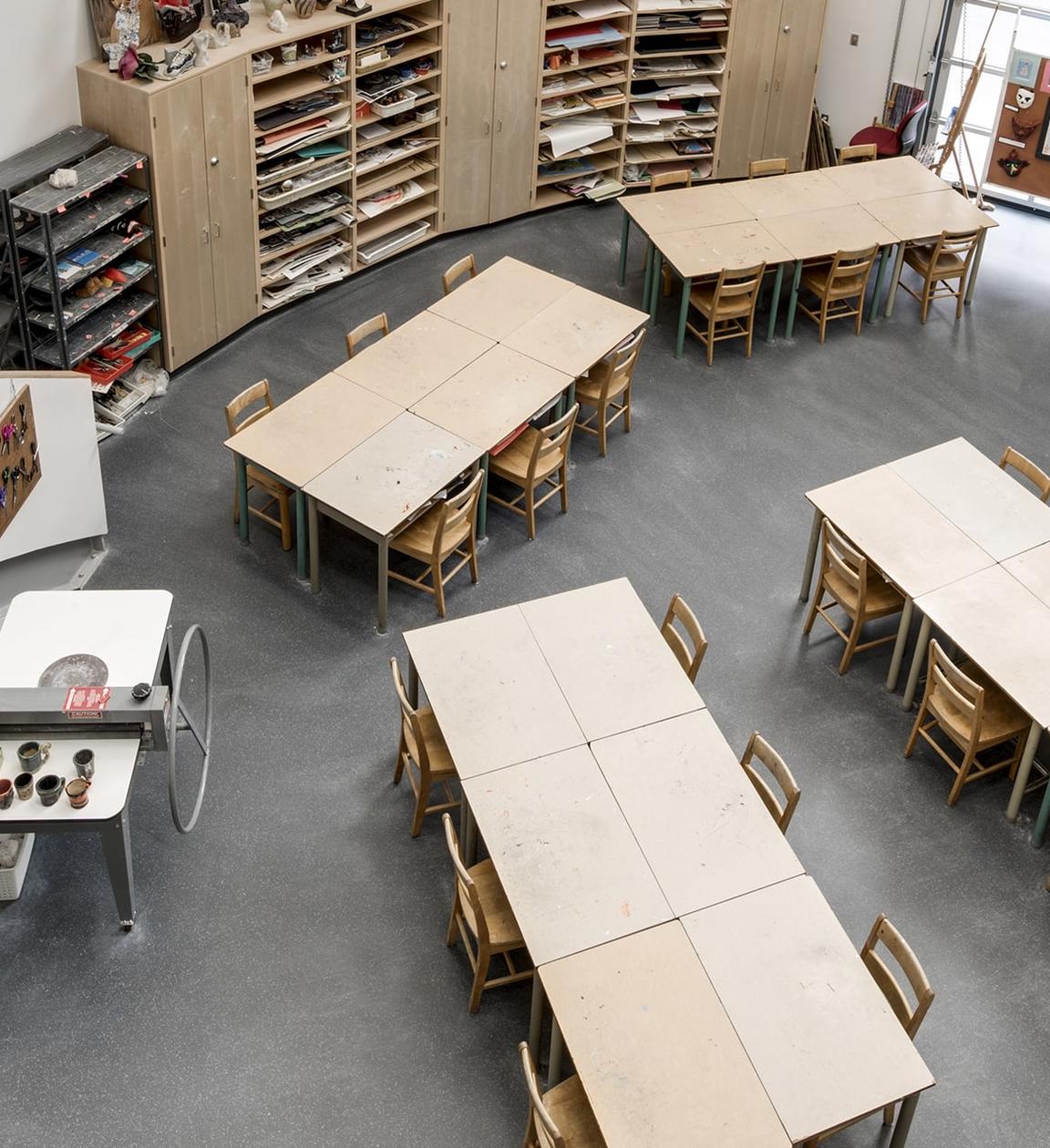 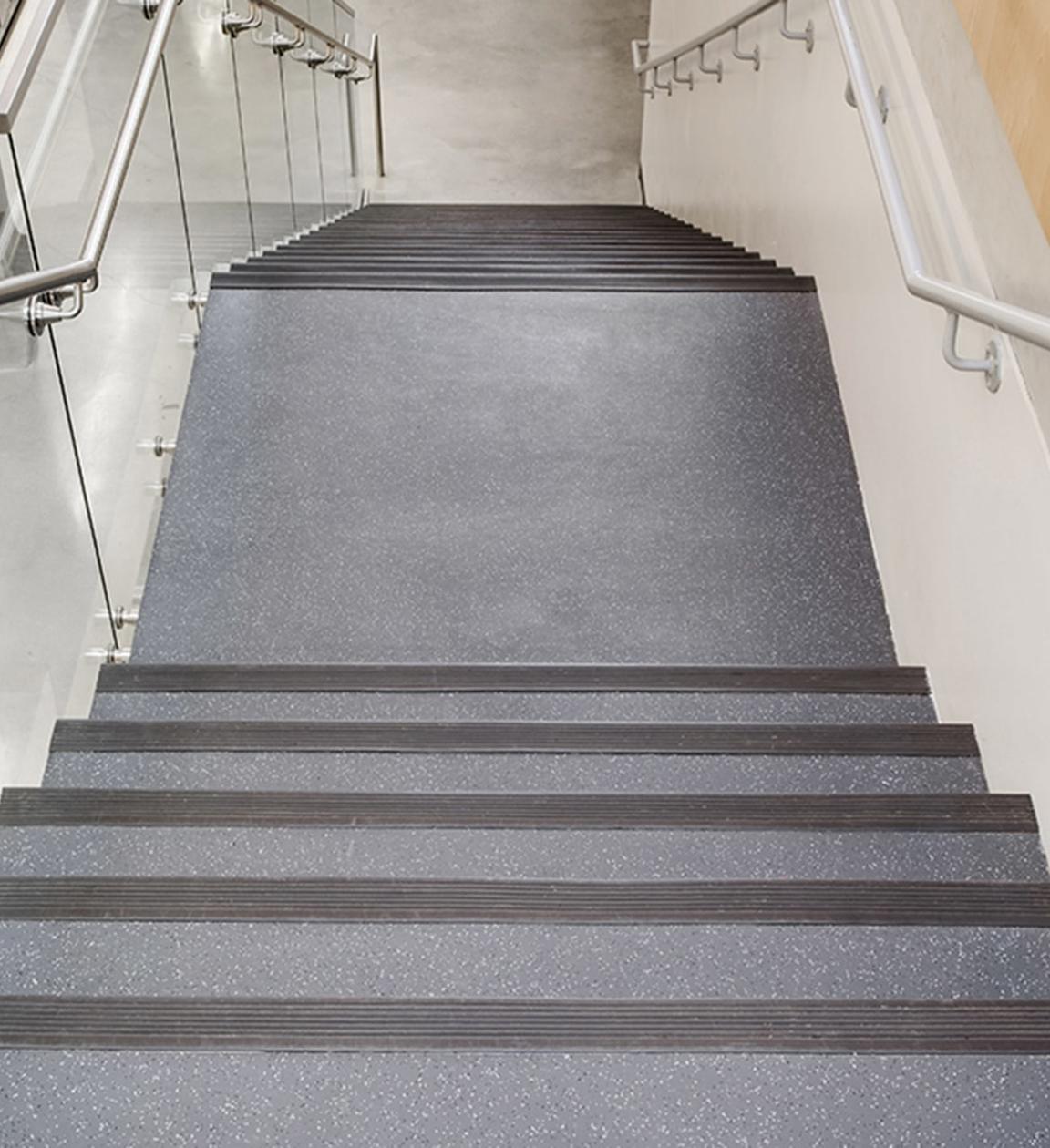 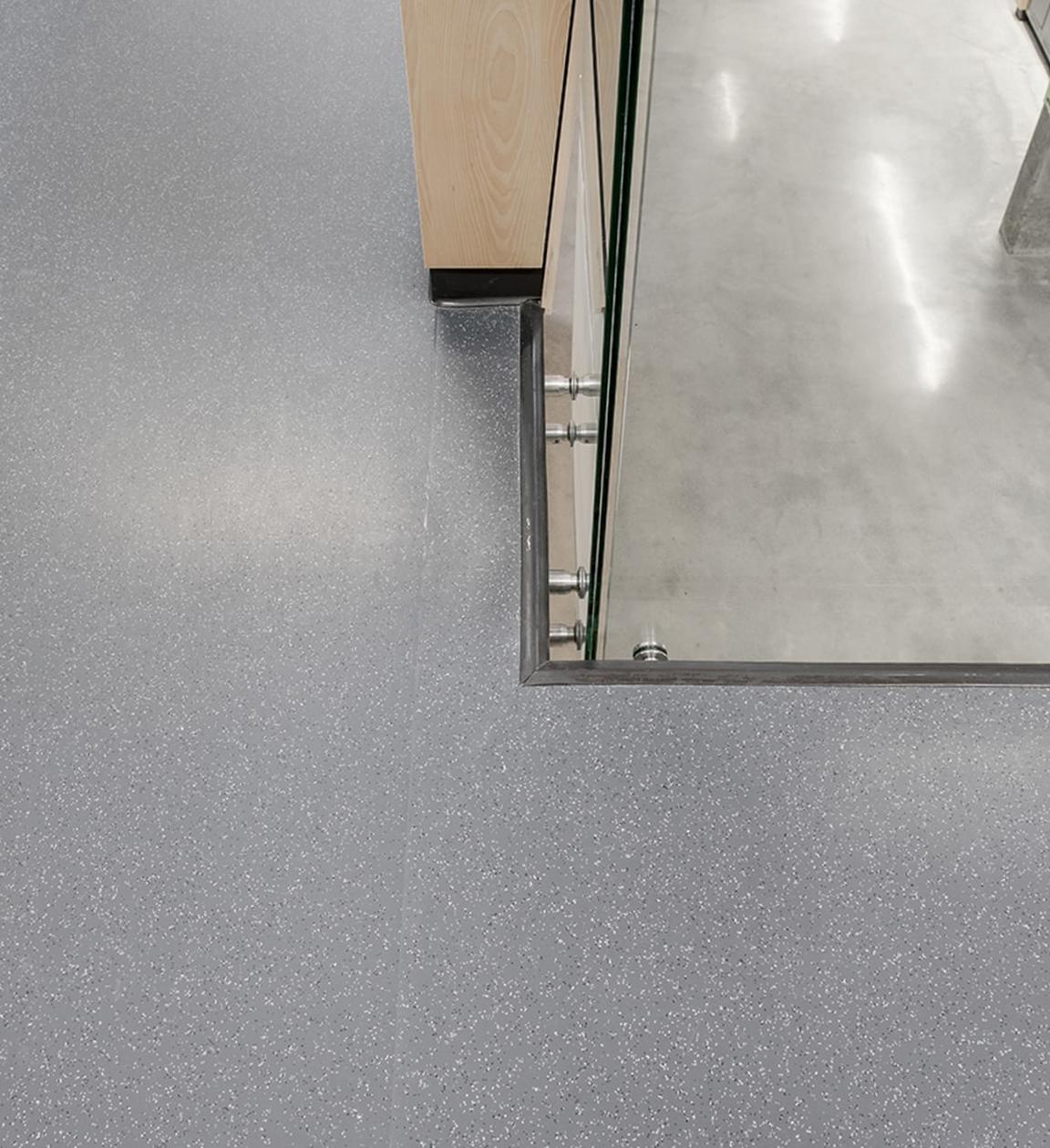 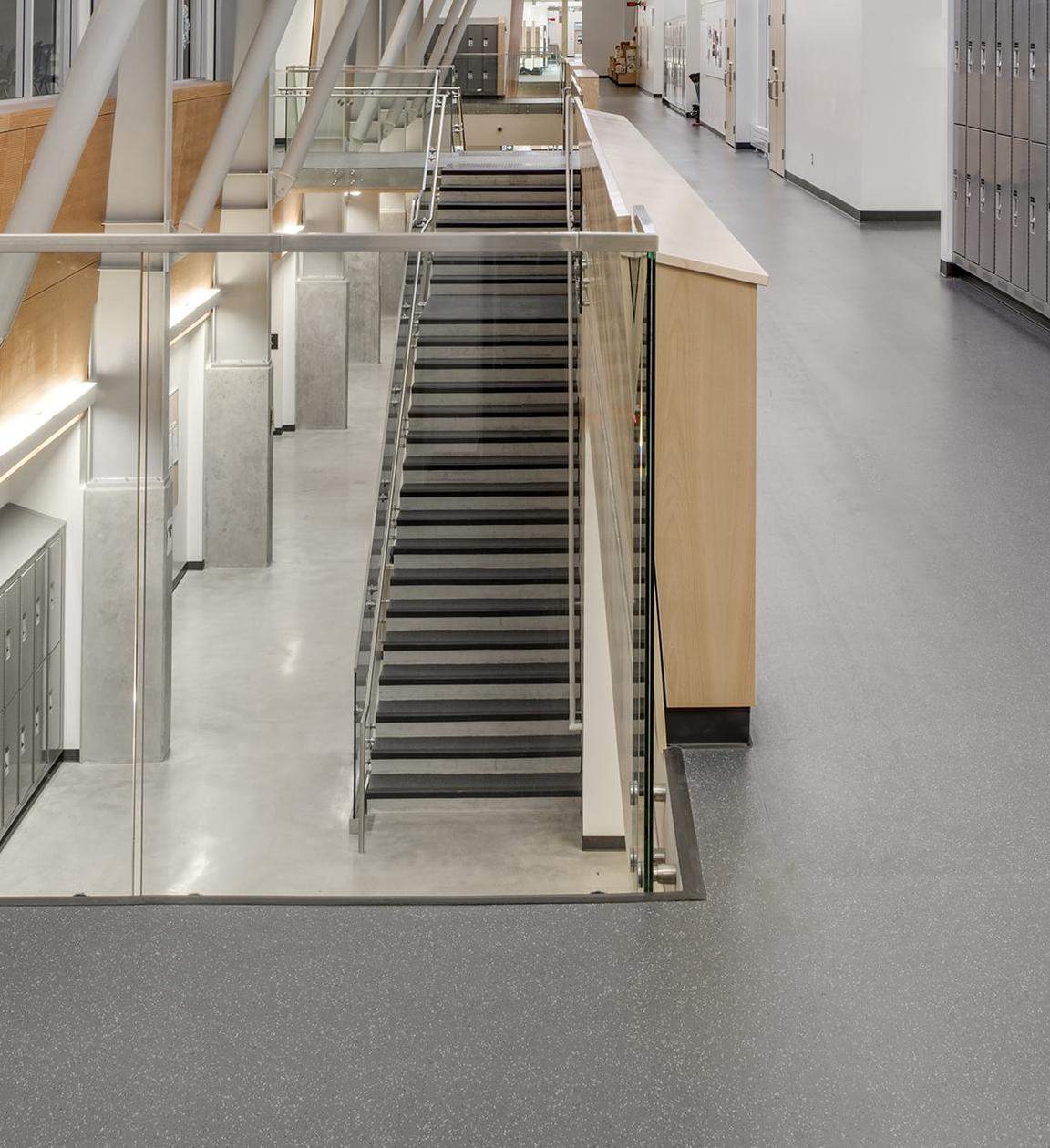 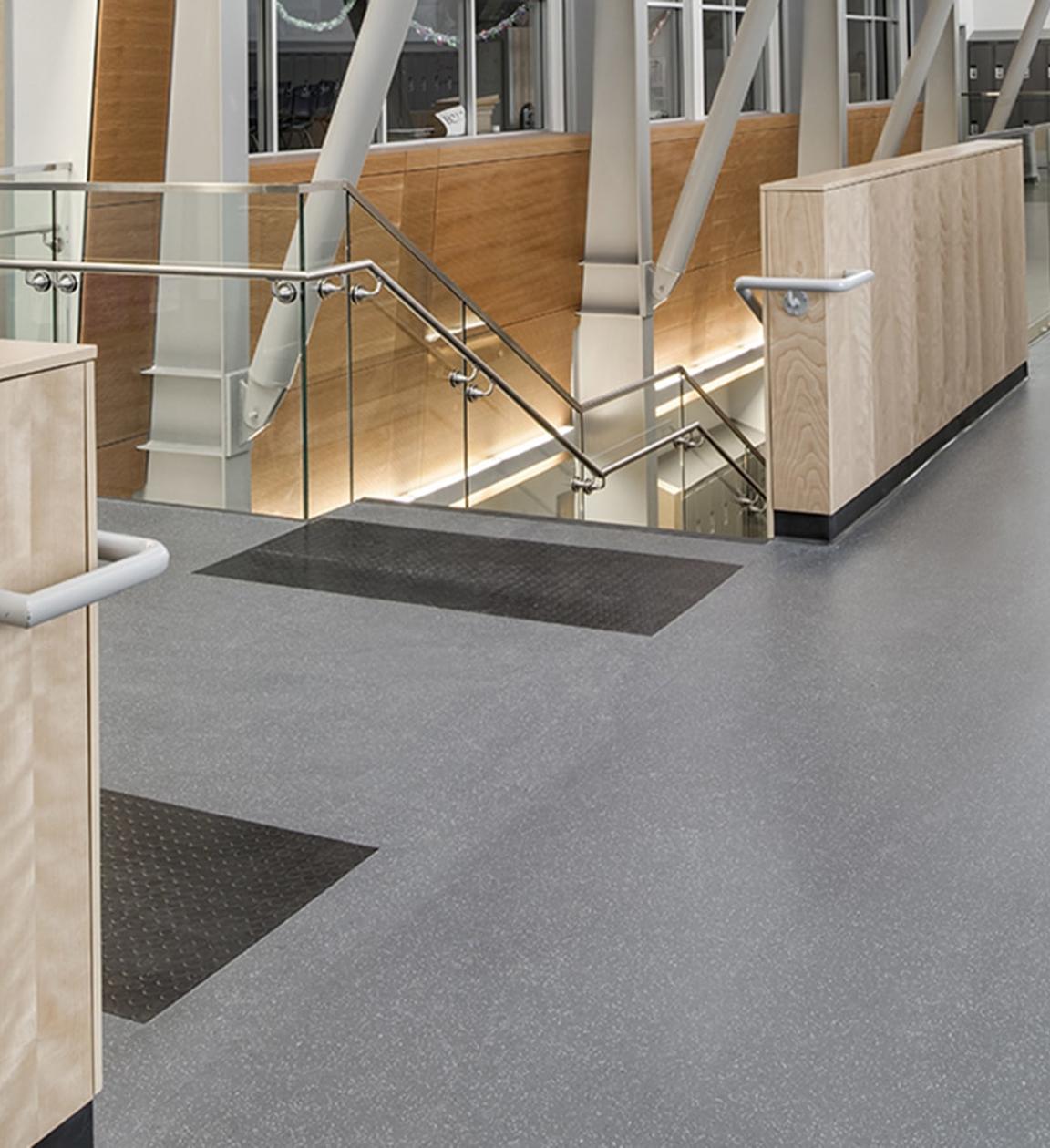 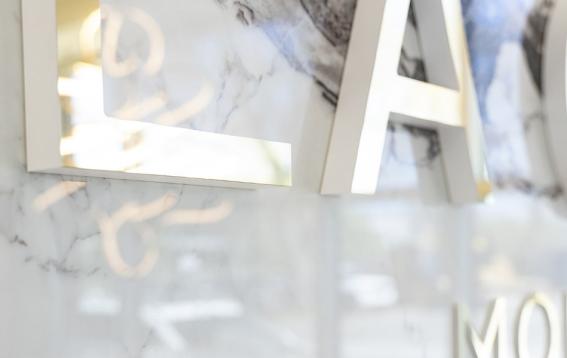 The mandate given by Dr. Perreault to designer Edith Bouchard was to create a décor where elegance and purity would blend with nature and the mountain of Saint-Hilaire. Sober materials, soft textures and light colours were used to create fine and soft harmonies. The oversized porcelain slab with the look of capraia marble and the gold metal logo imposes a focal point giving authenticity and sophistication to the space. 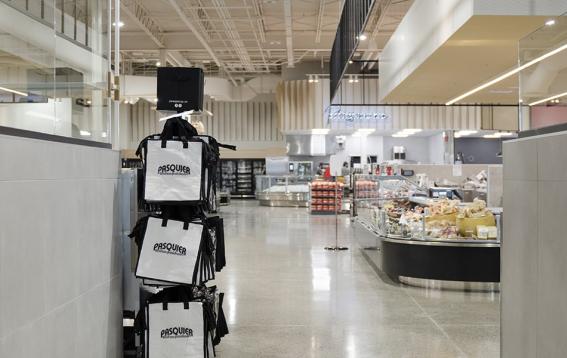 With its new Delson branch, the Paquette family is reinventing grocery store standards and creating a unique, innovative and daring food market. Its design is based on a sober and elegant background with warm colors and textures that highlight the products in an exceptional way. Every space and every detail has been created with the same concern and in the same perspective. Grocery shopping is now an easy, pleasant and inspiring task! 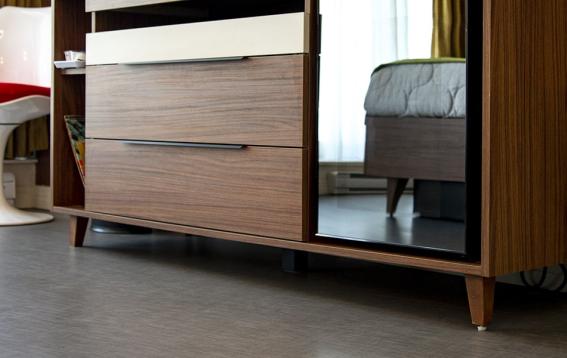 Taking you back to the 60's

A hotel inspired by the 60’s? We were curious to see that! Some time ago, Centura had the pleasure of collaborating with designer Isabelle Bélisle from Zabb design collective, on a rather unusual hotel project. 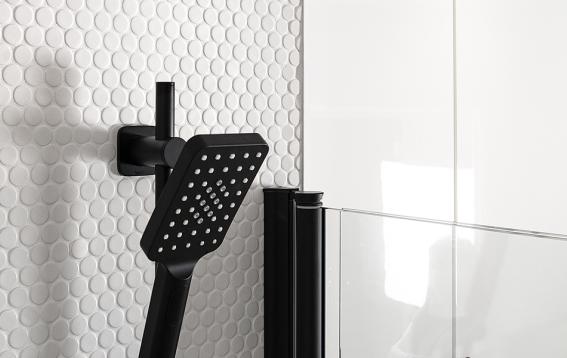 The combination of white color with patterned tiles is a timeless alliance that always creates a beautiful atmosphere in a project. 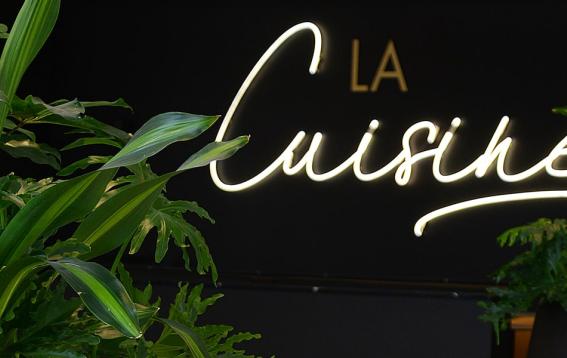 “La Cuisine” project at Rockland’s mall is located at the crossroads of highways 15 and 40 in Town of Mount Royal. 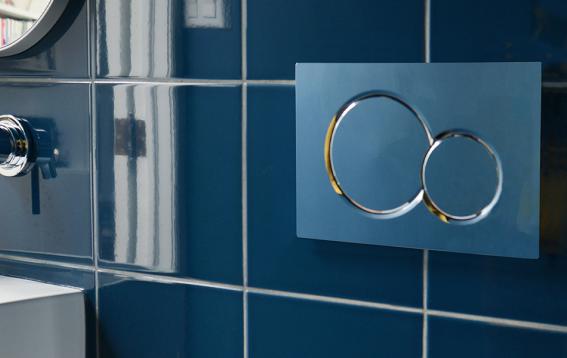 A refined and minimalist approach with classic lines, shapes and colours. 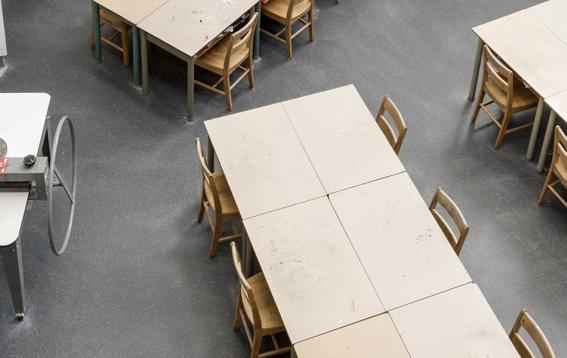 Centennial Senior Secondary School is in the heart of Coquitlam, B.C. and was originally established in 1967. Centennial has approximately 1300 students in grades 11 and 12. It is structured on a semester system. The Coquitlam School Board made the decision to build a new school on the same property as the original school. 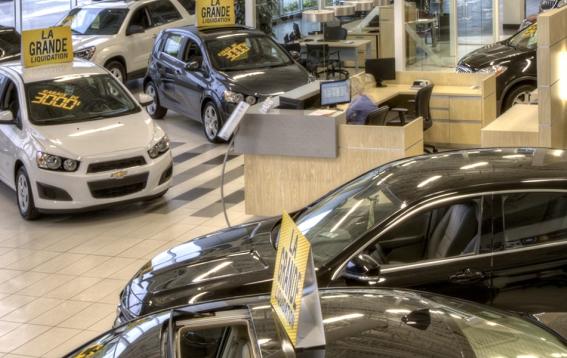 For the past 40 years, Le Relais Chevrolet has been one of the largest GM dealers in Quebec.  In 2011, designer Jasmine Forget from Intemporel Design worked on the restoration of the showroom.  All floor covering products utilized for this project are from Centura. 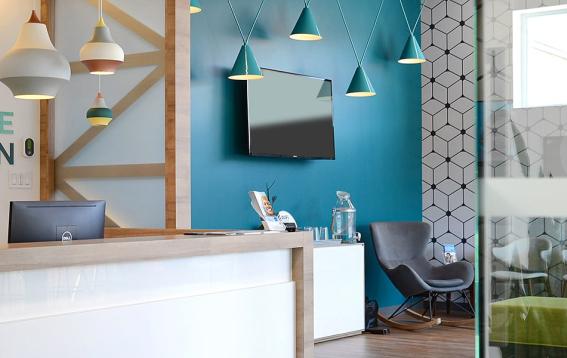 Atelier Lux Design has been mandated for the realization of a dental clinic filled with freshness and unexpected. The branding of this family clinic has to represent the dynamism, humanism and meticulousness of the dentist. No detail was left to chance. The colours, the warmth of the wood and the patterns inspired by the ’70s modernism bring a comforting atmosphere. 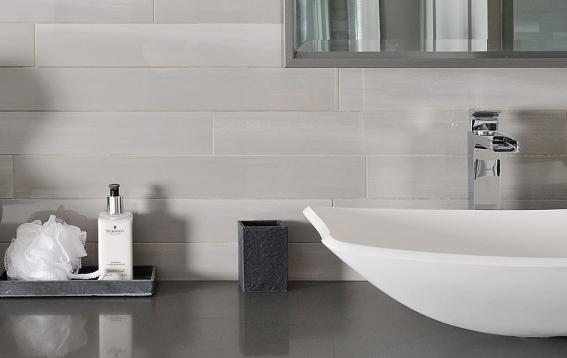 This house in Blainville, a suburb of Montreal, is a great demonstration that thin, large-format porcelain tiles can be used on the floor or on the wall anywhere in a residence. 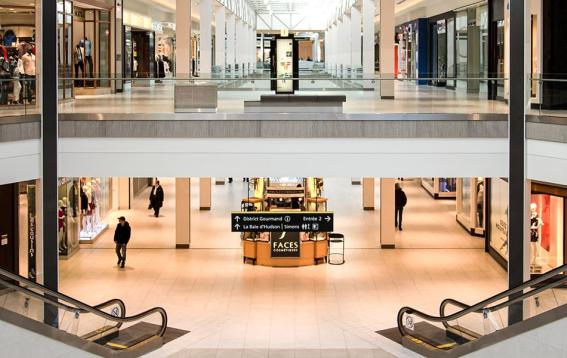 In 2014, Cadillac Fairview Corporation, owner of CF Promenades St-Bruno, the largest indoor shopping center on the South Shore of Montreal, began one of the most important transformation since its inauguration in 1977. 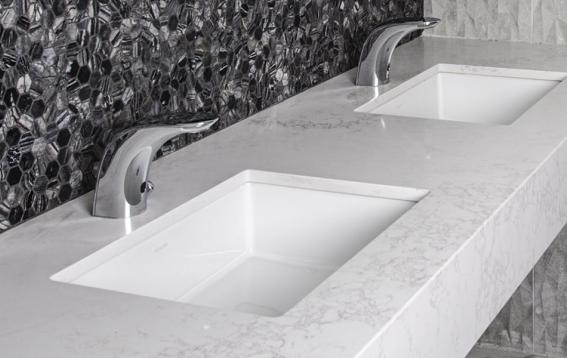 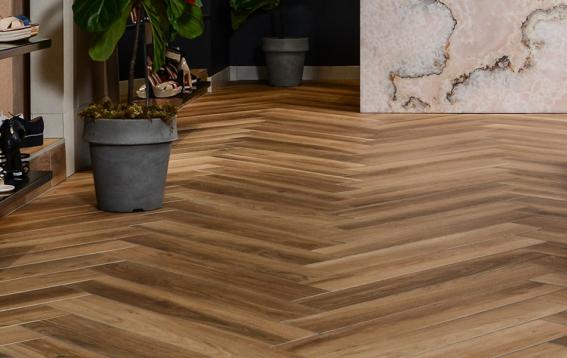 Located at Carrefour Laval, L’Intervalle has recently opened. This Quebec label offers trendy and quality shoes whose design is done in Montreal and manufactured in Europe. The concept of the store was designed by the firm Optima Design and offers a shopping experience where products are highlighted by refined and earthy materials. 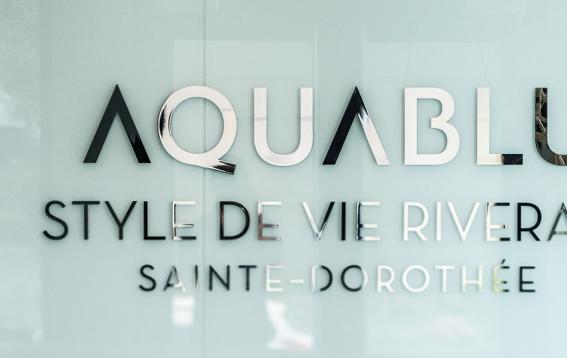 Located on the edge of the Rivière des Prairies in Laval, the Aquablu condominium project has 74 units. To achieve this design, the constructor requested the services of designer Alain Desgagnés and architect Jean-Pierre Bart. 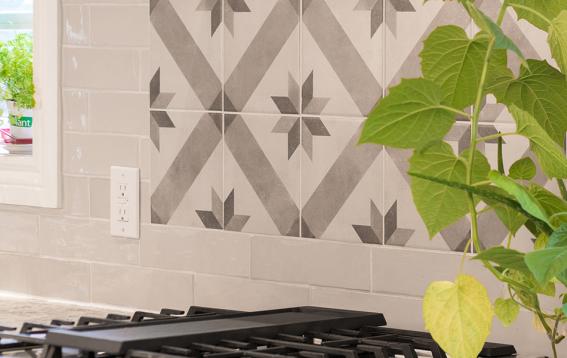 The source of inspiration for this space was the older architecture of the home. We wanted to bring a fresh feel to an otherwise older home, and open up the space to further strength the family’s bond. 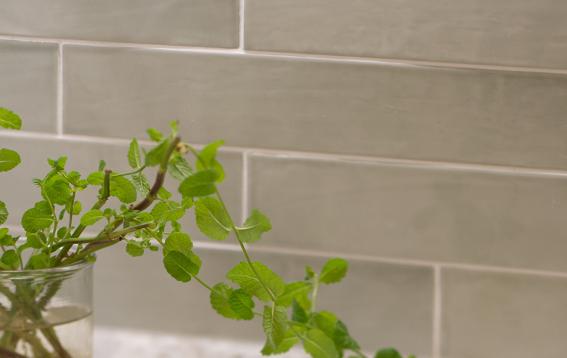 The colors hovered in the realm of the whites, the greens and the browns, which perfectly captured the whimsical feel of the garden, just steps away from the kitchen. 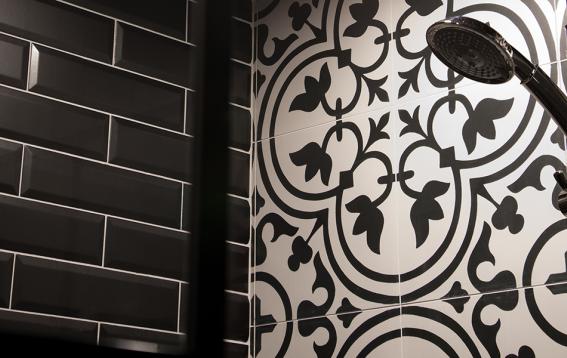 Here is a project by the J&J Interiors designers team that was mandated to create a family room with an impressive wine cellar as well as a bathroom with laundry. 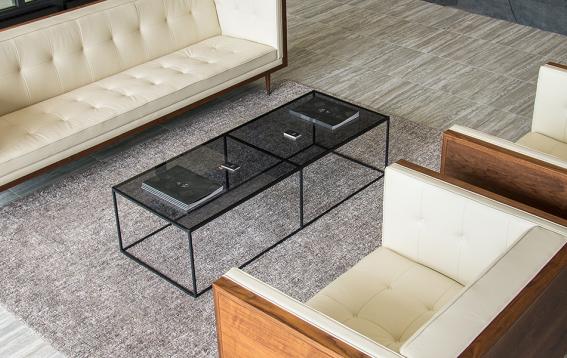 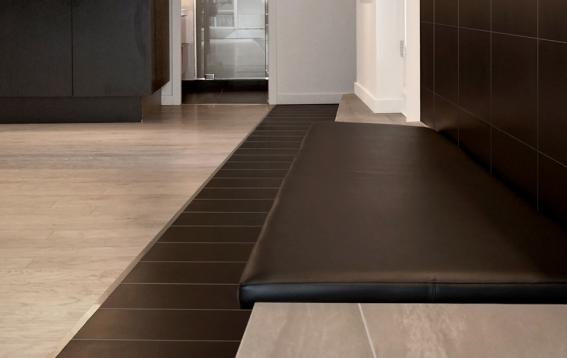 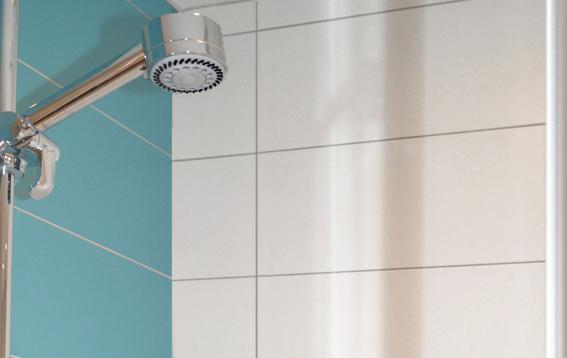 The challenge for designer Sylvie Noblet was to rejuvenate this typical cottage in the Town of Mont-Royal that had not been renovated since the 60’s.